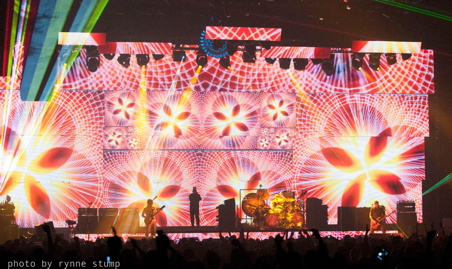 So it was a biggy that sparked our last minute dash to the US of A. If you’ve seen my previous review of Tool (you can view it here) you’ll know that I was already champing at the bit for another album and therefore a tour, back in 2012! As you can imagine, I let out an audible involuntary noise when they announced a handful of US dates in January this year. But the final straw came when they added a few more which included Austin and Houston, both places that we’ve been to and know quite well. Cue a couple of speedy conversations which culminated in the booking of tickets for these two shows.

A bit crazy? Well, Tool are the kind of band that can do that to you. What they manage to achieve, is more than just amazing music and a pretty light show. It’s like a full on sensual assault when you’re in front of the two things combined. My other half had seen them once before, here in Scotland (jealous? moi?) but claimed that he couldn’t remember much about it. I thought he might be trying to spare my feelings but now I know why.

The show lasts just under two hours (I think) and there’s even a cheeky 10 minute intermission but I’m still only getting snippets coming back to me. I’ve christened it PTTD (Post Traumatic Tool Disorder). However, the flashbacks are really awesome. So with the news that a completed album may yet be some time away, it was worth every mile of the 6000 (or so) that we travelled.

Join the Collective at https://www.toolband.com

p.s. A big shout out for recently re-formed 1990’s support band ‘Failure’. I really liked their vibe (think Nirvana meets Amplifier) and have since been listening to their ‘Fantastic Planet’ album. It’s superb and I do hope that they’ll stick around and write some new material…

It’s a pass with flying colours at https://www.facebook.com/Failureband?ref=br_tf