This week, Iain has been listening to The Race For Space 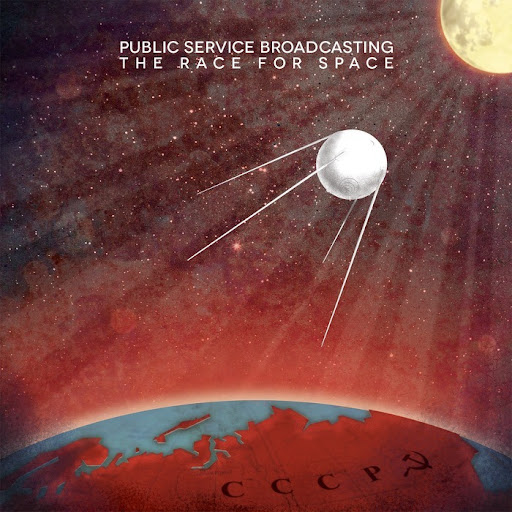 This album is a journey through the Race for Space using period material from the 50s, 60s and 70s. The cold war era was a terrifying time, with Russians and the USA posturing in a game of brinkmanship which we will hopefully never see again. One positive energy story from the time was the race for space, and Public Service Broadcasting’s music evokes the excitement, hope and spirit of this period in our history.

The album delivers fantastically crafted soundscapes which paint a vivid picture of the pace of the quest, the conquest of gravity and the lunar landscape.

The album’s opening track is The Race for Space, a fantastic soundscape which sets the scene for the album. Sputnik gives us the sense of breaking through the upper atmosphere with the faint radio broadcast from the satellite emerging when in orbit. EVA takes us on the build up to the first space walk with the tension and speed of the orbiting module. A breathtaking  momentary drop in tempo when the Cosmonaut leaves the capsule for the first time is sublime, before the orbital speed picks up again. The Other is the story of the journey of Apollo 8 and the first Lunar orbit where communications are lost on the dark side of the moon. The quiet anticipation of the re-emergence is delightful. Fire in the cockpit recounts the dreadful story of Apollo 1, the mission that never was. A sad but very necessary piece to illustrate that not all was hope and excitement. Go! takes us through the Lunar touchdown from the perspective of the earthbound mission control centre which is in total contrast to Valentina, a simple repetition of the name but in an ethereal way with the word quite literally floating in space. Gagarin is a homage to the bravery of the first man in space and a celebration of his return to the safety of the earth with an appropriate party atmosphere. Lastly, Tomorrow is a vision of what had been but what may still happen.

Intermixed with period broadcast material, this is informative, evocative and mesmerising not only for those who know the stories but for those who don’t.  Give it a listen, I’m sure you’ll enjoy it. The sense of emotion is tangible and even more so when sitting and writing about it here. A very big shout out to Alastair, a customer and friend of Loud & Clear who first introduced me to this when setting up his system in his home. That chance listening lead me to an appreciation, not only of this work , but all the other albums. I  have the new PSB recording, out in September, on pre order.