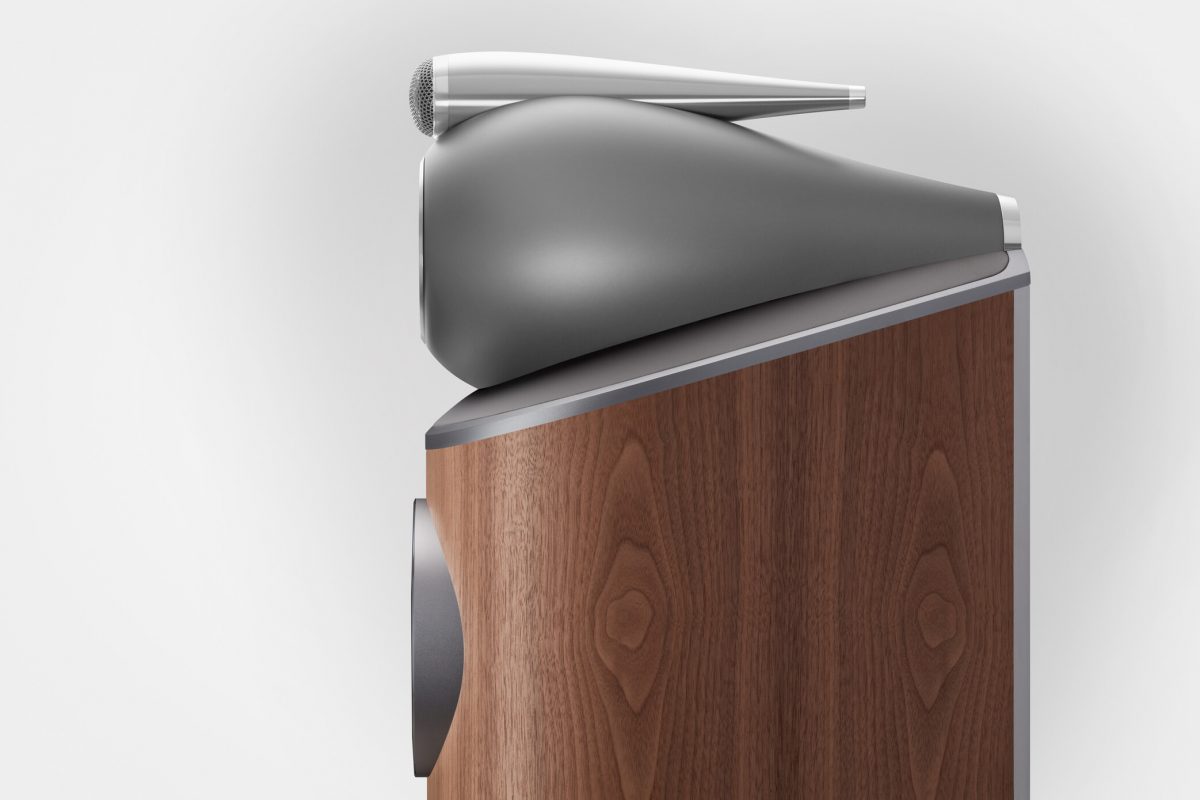 The world’s most iconic loudspeaker range is now even better. B&W 800 D4 Series is here, with an all-new industrial design and a range of breakthrough technologies to set even higher standards for outright sound quality. Loud & Clear will be receiving our demonstration D4 loudspeakers – 801, 802, 803, 804 and 805 – this week but for now, here is your first look at Excellence. Evolved.

How do you improve on the world’s most successful premium range of high-end loudspeakers?  It’s a challenge that has occupied the past six years for the finest minds in Bowers & Wilkins engineering team. Their solution is to combine continuous improvement of every component in each design with innovative and proprietary technology that re-imagines the fundamental basics of a conventional loudspeaker drive unit: the new, unique and revolutionary Biomimetic Suspension. Just one of a myriad of new technologies developed for the range, details of all below.

The new 800 Series Diamond range continues to feature seven models and a new finish has been added to the line-up – Satin Walnut joins Gloss Black, White and Satin Rosenut.

800 Series begins with the two-way 805 D4 standmount speaker, followed by a series of three-way floorstanding models: 804 D4, 803 D4 and 802 D4. And at the pinnacle, replacing the existing 800 D3 we have the flagship 801 D4 model, reintroducing an iconic name to the portfolio.

For home theatre use, the HTM81 D4 and HTM82 D4 provide a pair of high-performance centre channel speakers to complete the range. Every new model combines hundreds of detail improvements plus several entirely new technologies to create the most transparent, detailed and natural-sounding series of loudspeakers Bowers & Wilkins has ever produced. 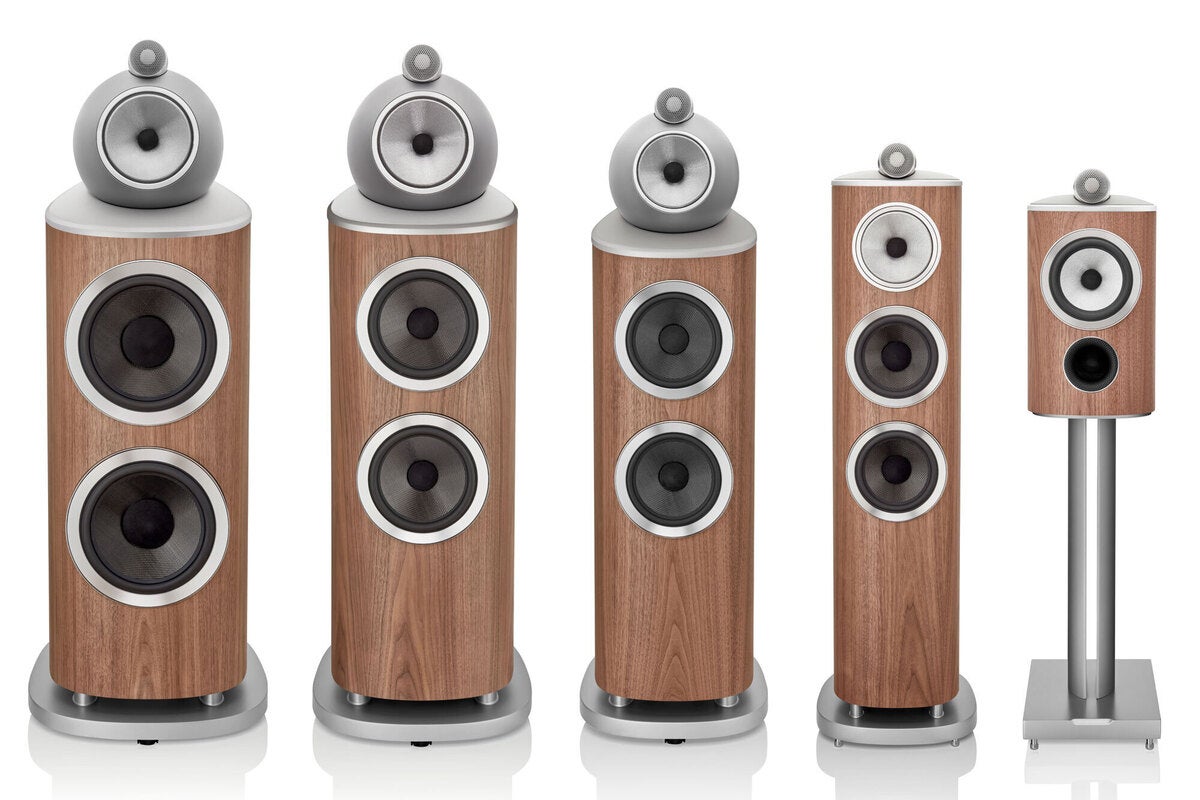 801 D4 £30,000
The flagship: a loudspeaker that sets the standard other high-end designs will be judged by for years to come.

804 D4 £9,500
With a more traditional aesthetic than its turbine headed siblings, the floorstanding 804 D4 excels thanks to stiff, curved cabinet.

805 D4 £6,250
The 805 D4 is the perfect choice for the audiophile who prefers a smaller standmount loudspeaker. It’s perfectly honed and accurate.

All five of these will be available for demonstration at Loud & Clear showrooms very, very soon. 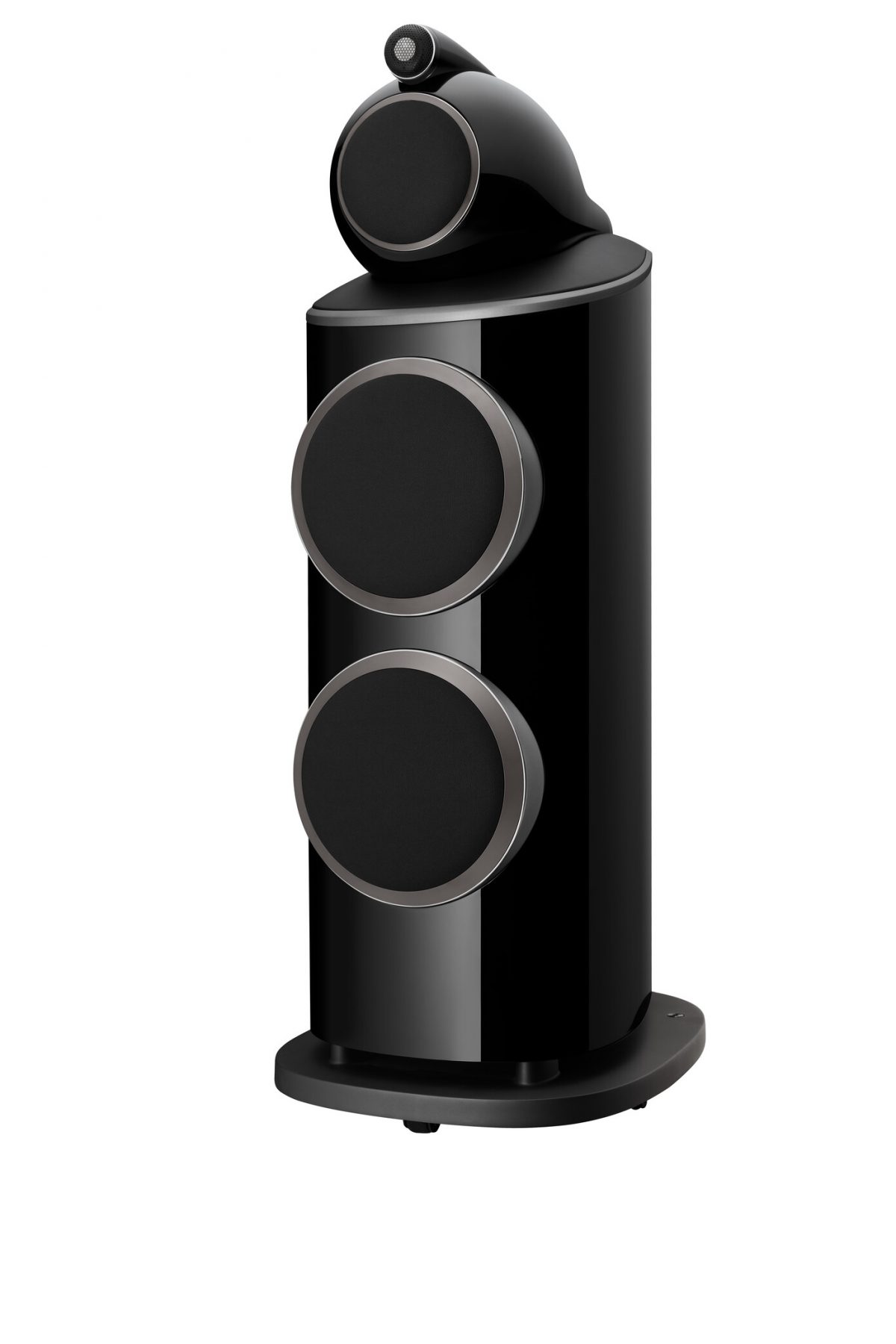 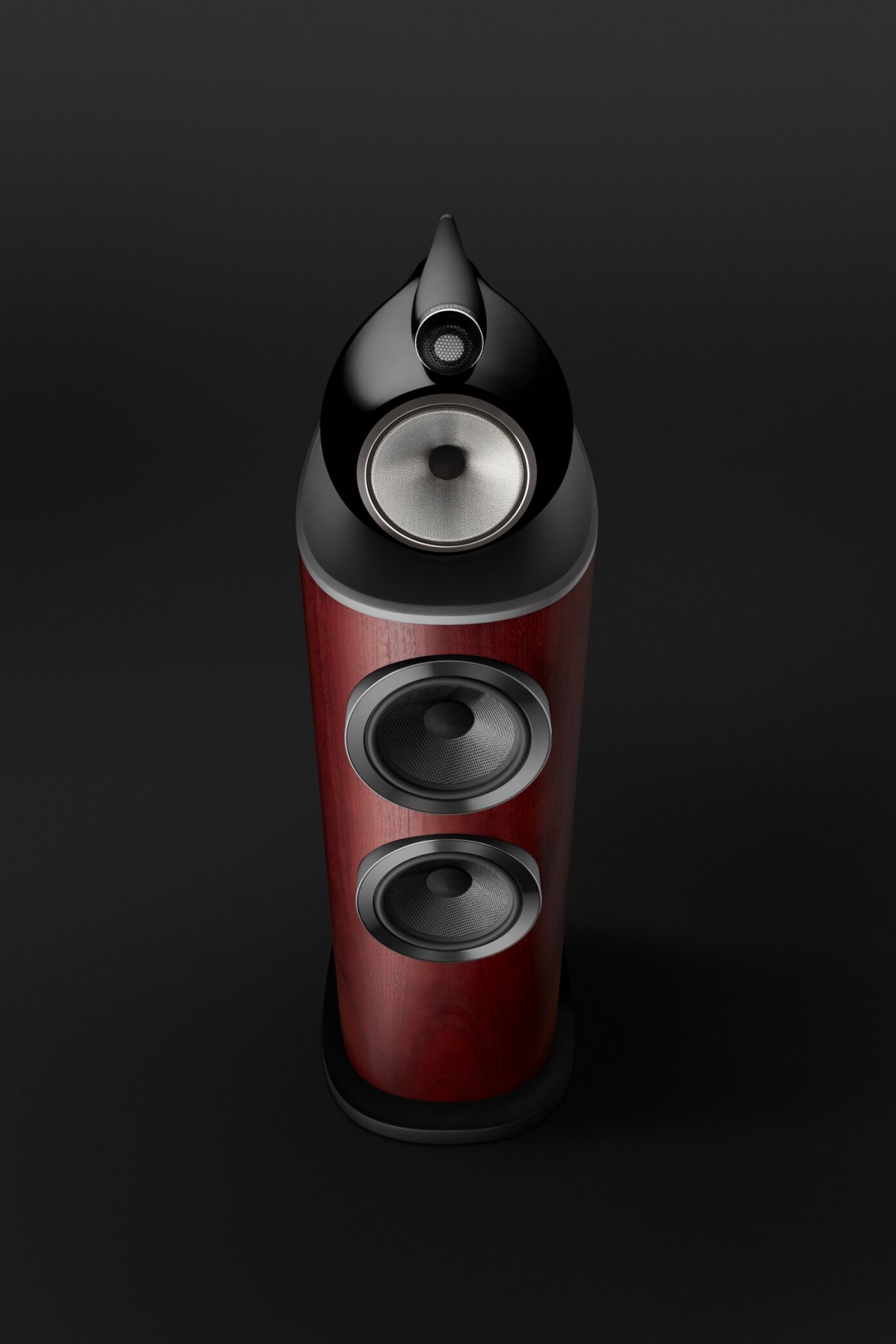 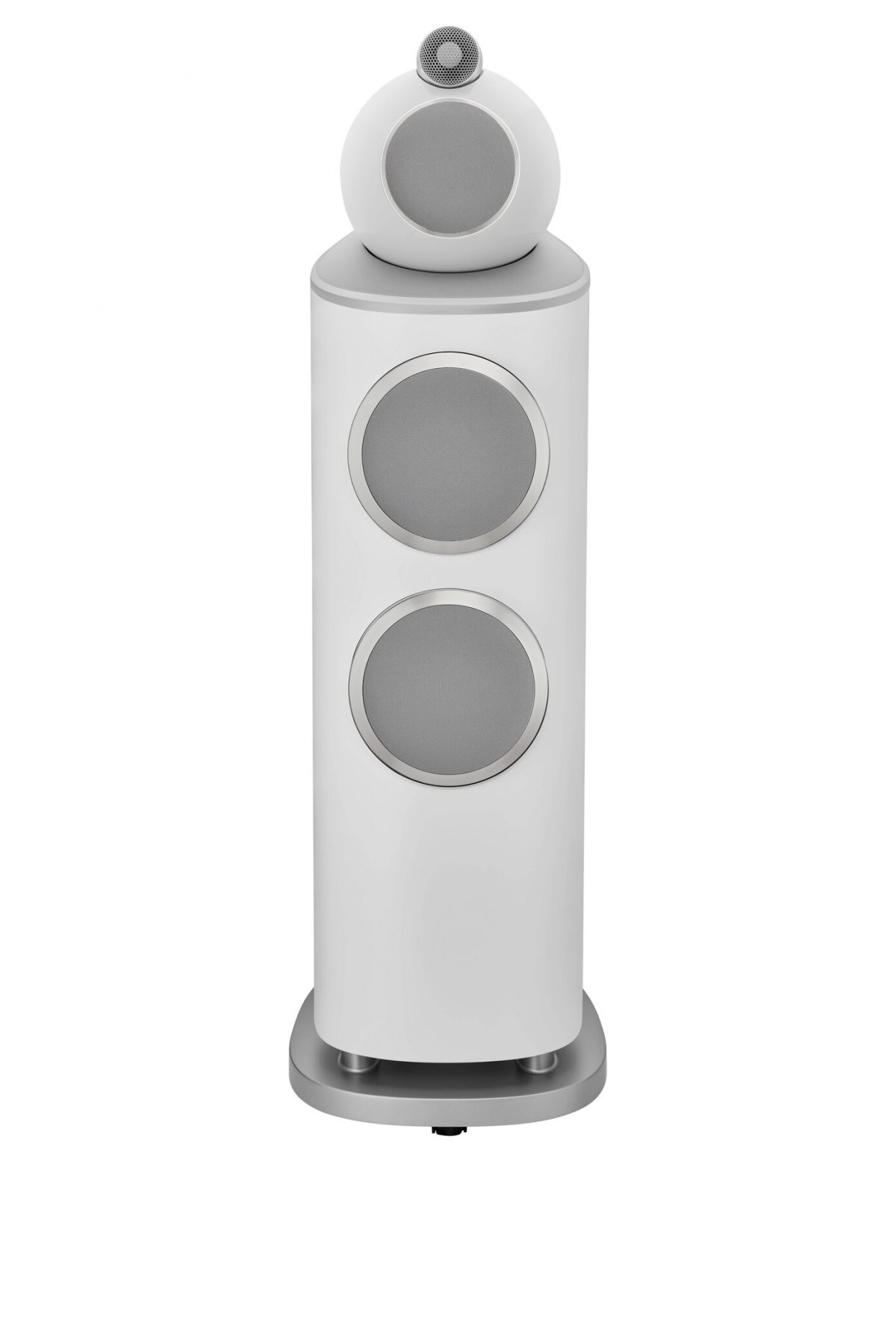 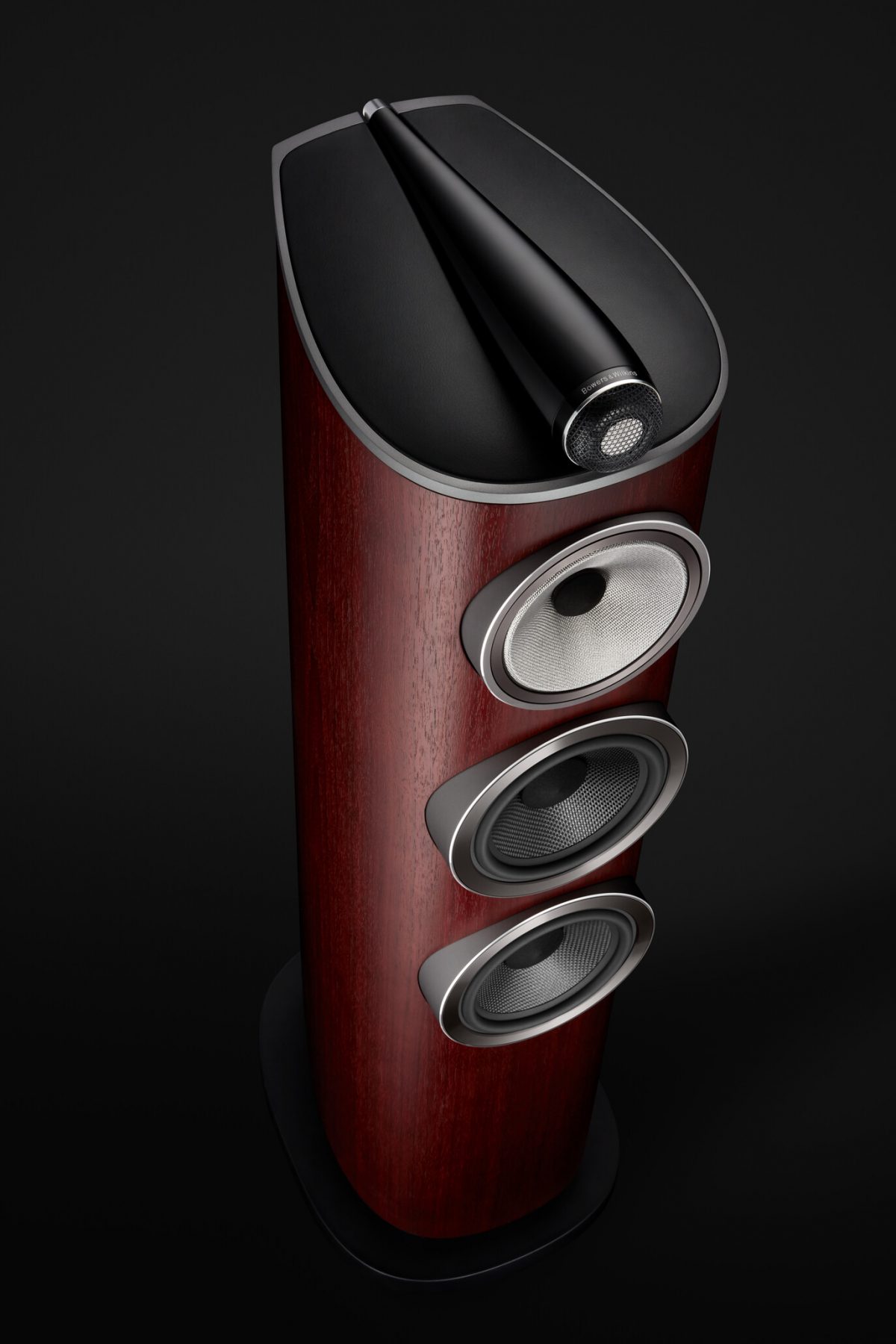 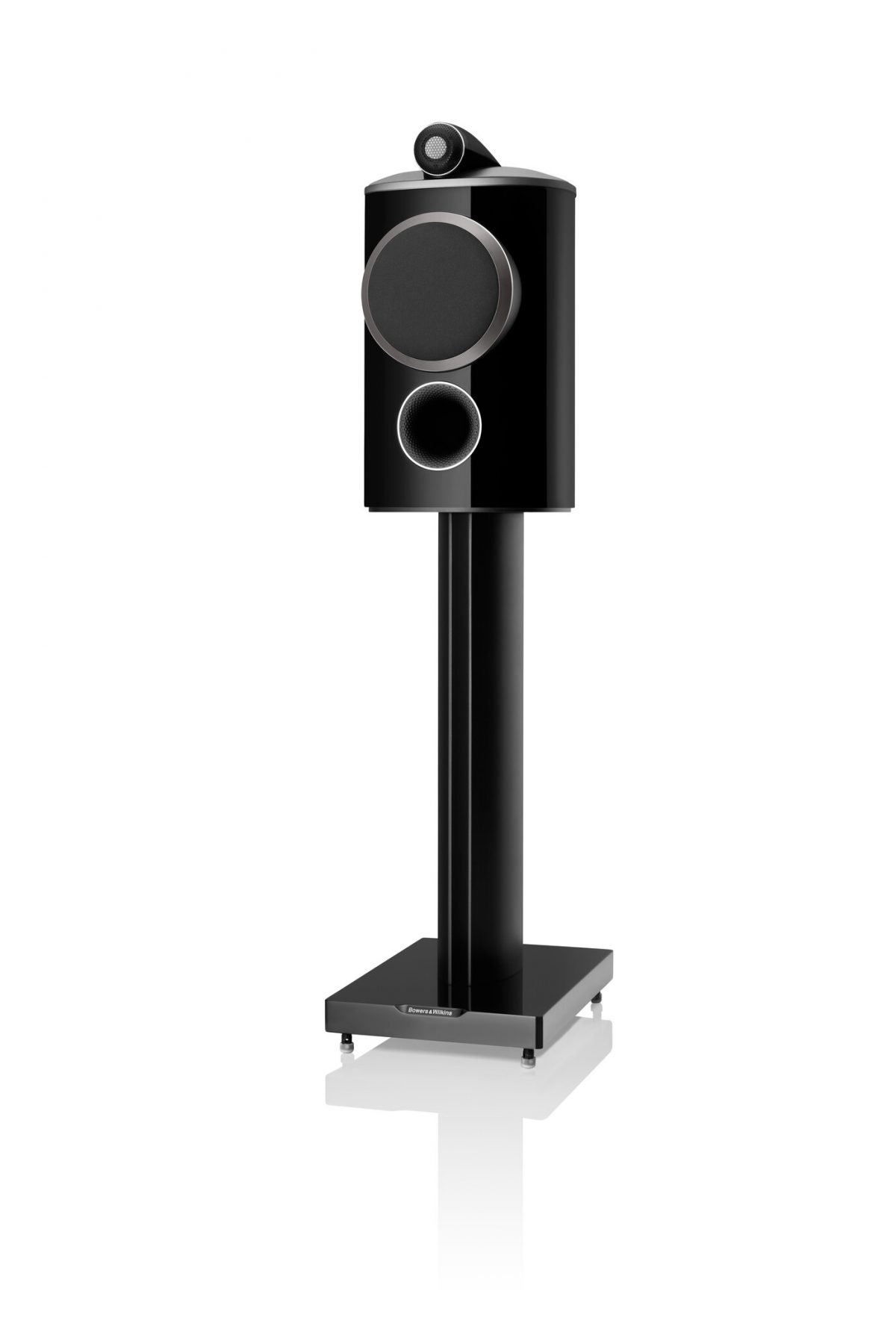 The first and most obvious change is the addition of a fourth finish to the line-up. The new range now includes a Satin Walnut finish, joining the established selection of Gloss Black, White and Satin Rosenut.

Every stereo model in the range also enjoys a significantly upgraded cabinet design with an all-new rigid, cast aluminium top section – replacing the previous wooden version  – to offer even greater stiffness and thus improve cabinet quietness still further. In a luxurious touch, the profile of the new aluminium top is finished in ‘Leather by Connolly’ – in black for dark cabinets (Black, Satin Rosenut) and light grey for lighter finishes (White, Satin Walnut).

Every model in the range adopts a revised version of the iconic Solid Body Tweeter-on-Top housing, with a new, elongated tube-loading system to produce an even more open sound for high frequencies. This supremely stiff enclosure deftly resists unwanted resonance and is an exceptional acoustic form – especially when combined with a new two-point decoupling system that isolates it from the rest of the loudspeaker more effectively than ever. As before, the Solid Body Tweeter is milled from a single solid block of aluminium and now, it uses an anodised finish, either dark or light depending on the cabinet colour, to celebrate that fact.

Finally, the range introduces three entirely new cabinet forms. The 805 D4 and 804 D4 stereo models adopt the reverse-wrap cabinet design first introduced in 2015 for the larger speakers in the series. This new form reduces the profile of each cabinet’s front baffle while dramatically increasing the overall rigidity of the complete system. It also allows crossovers to now be mounted in dedicated spaces on the rear of each speaker, housed behind the rigid aluminium spines.

The 804 D4 builds on the potential of its new configuration by adding a downward-firing port with an integral aluminium plinth – again, much like the form used by the larger floorstanding speakers in the range. Alongside the 805 D4 and 804 D4, the all-new HTM82 D4 centre speaker adopts the reverse-wrap cabinet form of its siblings, for superior acoustic and mechanical performance.

Here, the Bowers & Wilkins team explain some of their technologies developed in the journey to create 800 D4 Series. Excellence. Evolved.

Continuum™ Cone, FST & Biomimetic Suspension
The result of an eight-year research programme, the composite Continuum Cone – used for both midrange and mid/bass applications – is already famed for its open, transparent, and neutral performance. When used as a midrange drive unit in Bowers & Wilkins floorstanding speakers, it is always combined with our Fixed Suspension Transducer (FST) midrange technology, which carefully avoids the coloration that traditional cone surrounds can introduce. Now, Bowers & Wilkins has combined the twin benefits of Continuum and FST with an all-new advance that transforms the other key element of a drive unit’s normal operation: the fabric spider. Over decades of continuous development to nearly all areas of speaker design, the fabric spider, a key element in the suspension of every conventional loudspeaker drive unit, has remained largely unchanged – until now. The all-new composite Biomimetic Suspension replaces the conventional fabric spider with a minimalist composite suspension system that revolutionises midrange cone performance by greatly reducing unwanted air pressure – aka sound – that a conventional fabric spider can generate, removing its unpredictable, non-linear effects. The result is unprecedented midrange transparency and realism.

Decoupled Midrange & Turbine™ Head
Bowers & Wilkins combines all the performance-enhancing benefits of its Continuum Cone, FST midrange technology and Biomimetic Suspension with careful isolation of the complete midrange assembly from the rest of the surrounding cabinet. In all three-way models, midrange drive units include a highly stiff all-aluminium chassis featuring Tuned Mass Dampers (TMD) to quieten any resonance. These complete drive units and motor systems are then isolated on sprung-mounted decoupling mounts, further restricting the flow of vibration into the assembly. Finally, 803 D4, 802 D4 and 801 D4 include the massively stiff all-aluminium Turbine Head enclosure for their midrange drive units, providing not only an outstanding acoustic form but also even better isolation – since the head assembly is itself further decoupled from the bass enclosure below.The HTM81 D4 and HTM82 D4 introduce a new and similar concept but inside their cabinets: each centre-channel model now features an internal aluminium enclosure that provides a stiff, well-isolated housing for the midrange drive unit and its decoupling mechanism.

Solid Body Tweeter
To minimise the unwanted transfer of resonance into each model’s Diamond Dome tweeters, an exceptionally stiff enclosure is required. The new 800 Series Diamond introduces a revised version of the iconic Solid Body Tweeter housing; this continues to be machined from a solid piece of aluminium, but now it features an elongated form (almost 30cm/12in long) with a longer internal tube-loading system. The new Solid Body Tweeter assembly is now decoupled from the speaker body or Turbine Head (depending on model) in two locations rather than one: this notably improves spaciousness and openness. At the same time, the tweeter’s motor assembly has been re-engineered to allow the drive unit to ‘breathe’ more effectively with no loss of performance. The result is a notable reduction in the resonant frequency behind the tweeter dome.

Reverse-Wrap Cabinet & Matrix™
Matrix has been a core Bowers & Wilkins technology for more than 30 years and has also been continually developed throughout that time. An internal structure of interlocking panels that brace the loudspeaker internally in all directions, Matrix helps to make speaker cabinets rigid, inert and quiet. The 805 D4 and 804 D4 now feature the reverse wrap speaker cabinet previously reserved for the larger floor-standing 800 Series Diamond models. Each model now has a stiff aluminium plate on the inside face of its cabinet, bracing its baffle against resonance. Inside, both models also feature updates to their Matrix bracing, with thicker panels made from solid plywood rather than the previous MDF, reinforced by aluminium bracing sections. Every stereo model in the range also features the new cast aluminium top replacing the previous wooden design, dramatically increasing the rigidity of the speaker enclosure. As before, drive units are housed in stiff aluminium pods mounted to the baffle of the speaker while crossover units are fitted to equally stiff aluminium spines running up the rear of the cabinet. Finally, 801D4 introduces a steel plate in its base section around the port – again, all in the name of adding stiffness to the enclosure and further quietening its operation.

Aluminium Plinth
The 804 D4 now joins the other floor-standing models in the 800 Series Diamond range by offering a downwards-firing Flowport bass port, exiting on to a new, stiffer solid aluminium plinth complete with a constrained layer steel damping sheet designed to offer a rock-solid foundation and to control unwanted resonance. The 804 D4 also has greatly upgraded spikes and feet, with huge M12 spikes that are both more stable and stiffer than the outgoing M6 designs.803 D4, 802 D4 and 801 D4 use the same arrangement of downwards-firing Flowport, solid aluminium plinth and constrained layer steel damping, but retain the wheel-plus-spike configuration introduced in 2015, making each model far easier to manoeuvre to the perfect listening position than any rival design.

Aerofoil™ Cone
The result of advance computer modelling, the Aerofoil Cone is a composite bass cone with a varying thickness designed to offer maximum stiffness where it is most needed while preserving a low mass – thanks to its carbon-fibre skin and light syntactic foam core. 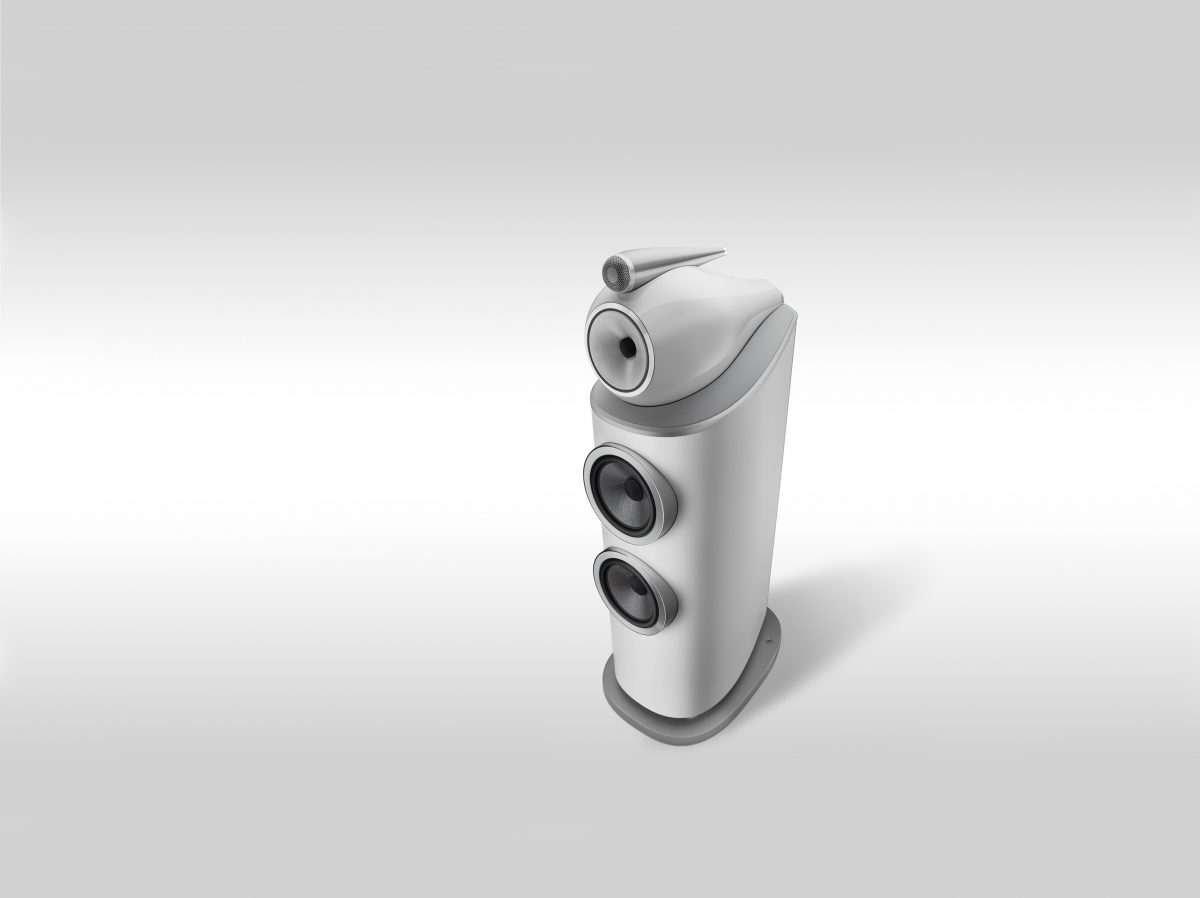 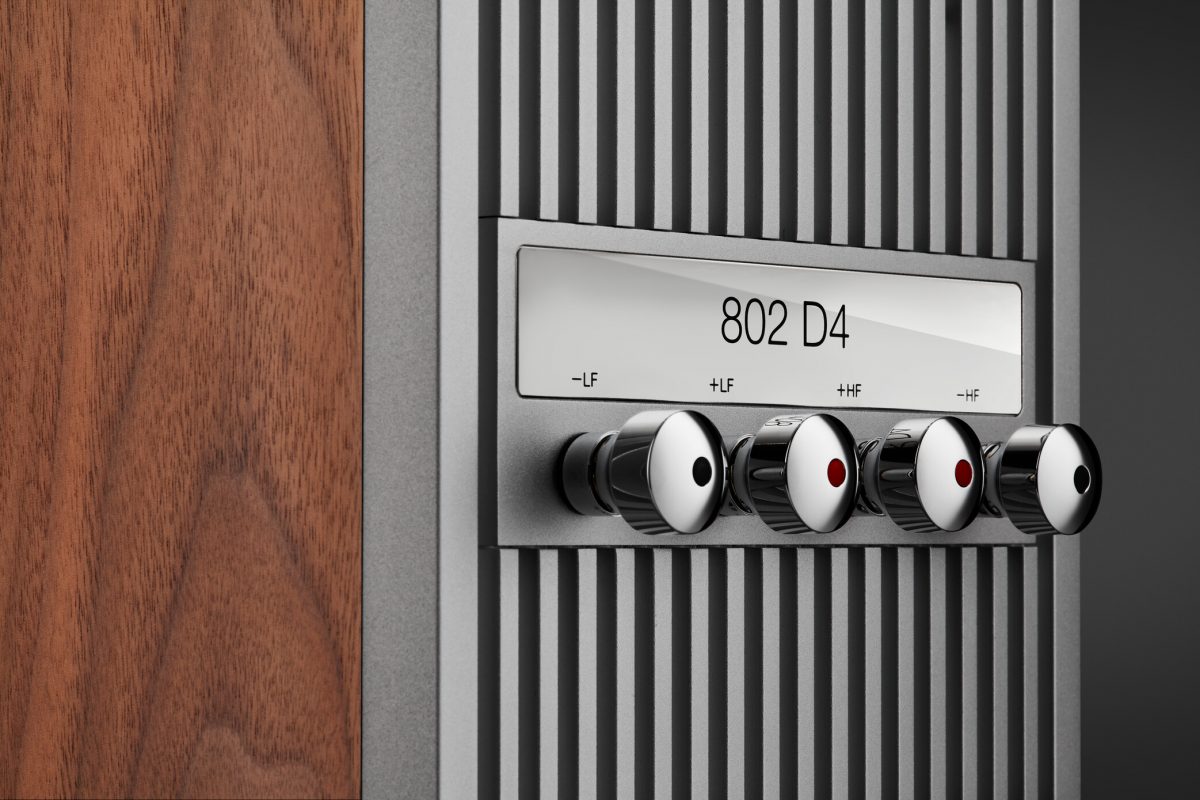 We will have this extraordinary range of loudspeakers in our showrooms this week. More photos and impressions to follow f course when we get them set up and running😊.

In the meantime, to book your listening session, please get in touch on 0141 221 0221 or email glasgow@loud-clear.co.uk.